Food Quality – A
Service – C
Atmosphere – B
Pricing – B

An interesting concept with lovely surroundings and kitsch flourishes, let down by poor service.  Whilst the food is lovely and of no-doubt high quality it is tainted by a feeling of inexperience.  One to leave a few months before trying

Myself and two others decided to try out Hotel Chocolat’s new London-based restaurant for lunch.  Whilst its location is ostensibly very central, it is somewhat tucked away behind Borough Market; the quaint, specialist food-stalls of the market perfectly complementing the restaurants USP.  Rabot 1745 includes cacao nibs in every dish of the menu (chocolate).

The ground floor of Rabot 1745 is more of a Café and shop, but we’ll 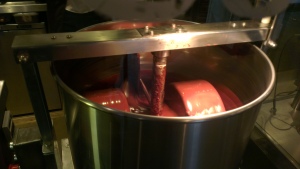 get to that soon.  Upon arriving we were guided upstairs to the restaurant – whilst somewhat sparsely populated, it was a weekday lunch-session, so it is to be expected.

One immediately notices two things at the table; a small dish next to eat place filled with several roasted cacao beans, and a third grinder on the table.  Our curiosity got the better of us and one of the party had already started eating a cacao bean before the waiter came to explain to us how to properly eat them (remove the skin.)  It’s a nice

little touch, an introduction to this bizarre Wonkarian World.  Further inspection also revealed the third grinder to be filled with nibs to season your meal.  Whilst they didn’t catch and grind very well, it was at least another fun touch – thought has clearly been applied to maintaining the theme without getting too gimmicky.

We ordered from the fixed-lunch menu, with three options for each 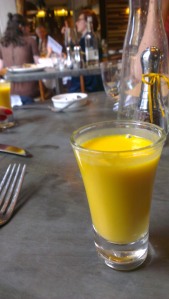 course.  The menu includes a nice variety of flavours, making one marvel somewhat that they have applied chocolate to such a range; pork, fish, multiple vegetables, pesto, leek and potato.  My party of three each ordered separate starters.  However, before they arrived we were presented with a shot-glass each filled with orange liquid.  Alas, the waiter’s silence as he served them left us to wonder “have they mixed up our order?  What on earth is this stuff?  Mango?”  A quick chat with the fellow as he walked past again unearthed that they were a complementary amuse-bouche of Pumpkin Soup.  Smooth, buttery and well seasoned, it was a lovely way to begin the meal.

Whilst I cannot speak too much for the Rabot Salad or Spiced Aubergine they certainly looked lovely and my party thoroughly cleaned their plates.  As for the Pork Terrine, I was mostly impressed.  The thick streaks of fat running through were a little much; whilst terrine is never going to be low fat, allowing half of the dish to be conspicuously fat-filled is a somewhat questionable idea.  However, accompanied by the nib bread and chutney is was a thoroughly satisfying starter.

The mains were even more interesting.  The Roasted Cod on Nib Spinach went down beautifully, with the bitterness of the nib spinach being mellowed by the celeriac puree which, by itself, would have been a somewhat bland sauce accompaniment.

As for the Beef One Pot with Nib Gravy and Marrow Dumplings – unashamedly fatty once more and incredibly rich, the portion size was perfect.  It is simultaneously very familiar (who hasn’t had a beef stew?) yet entirely new through its left-field yet genius addition of chocolate to the gravy.  Whilst not entirely unlike the beautiful bitterness of a stout in a stew, it ultimately establishes itself as a totally fresh sensation for the taste buds.

One cannot fault the presentation of the dishes either.  Its modern-chic feel of puree slicks and starkly contrasting colours may work somewhat in opposition to the rustic, pseudo-tropical decor of the place, but it is welcome nonetheless.  I really struggle to fault the chef.

The serving staff, however, are less bulletproof.  Besides generally being slow, there were some bizarre mistakes made; Plates were collected at totally separate times, leaving some places empty whilst others were staring at dirty dishes; empty jugs of water sat at the table as new ones were brought; dishes were confidently served to the wrong person (if you’re unsure, ask who ordered the terrine).  There was also a silly mix-up with the bill and the toilets were dirty and complete with a mop-bucket left out.  All of these mistakes are simple enough, but cumulatively they tainted what was otherwise a beautiful meal.

After the food we descended the steps to the cafe.  Here the Caribbean-inspired decor takes full force.  Whilst upstairs is kitted out with plenty of mixed wood, downstairs throws you into a Saint-Lucian plantation hut, albeit with an air of the industrial.  These are all compliments, however, as the effect really does work.  Combined with the beautiful smell of roasting chocolate and cute kitsch touches, it’s certainly a hipster’s paradise.  Shame about some of the laughable misspellings on the blackboard, of which “Chilly Chocolate” was a favourite.

The White Chocolate and Jasmine Drink was absolutely to die for,

though.  Often the subtlety of white chocolate is lost in its hot drinking adaptations, but this was utterly divine, and highly recommended for anybody passing through the London Bridge area quickly, although like most of the menu it is devilishly rich!

Thus concluded our experience of Rabot 1745.  A valiant effort to redefine the use of chocolate in British cuisine and culture, returning it to its savoury roots.  With a little more time to get into its stride and perhaps some staff-readjustments it will offer a better experience…one can only hope.

Want to give them a try for yourself?  Take a trip down to Borough Market and see what you think.  http://www.hotelchocolat.com/uk/restaurants/locations/rabot-1745