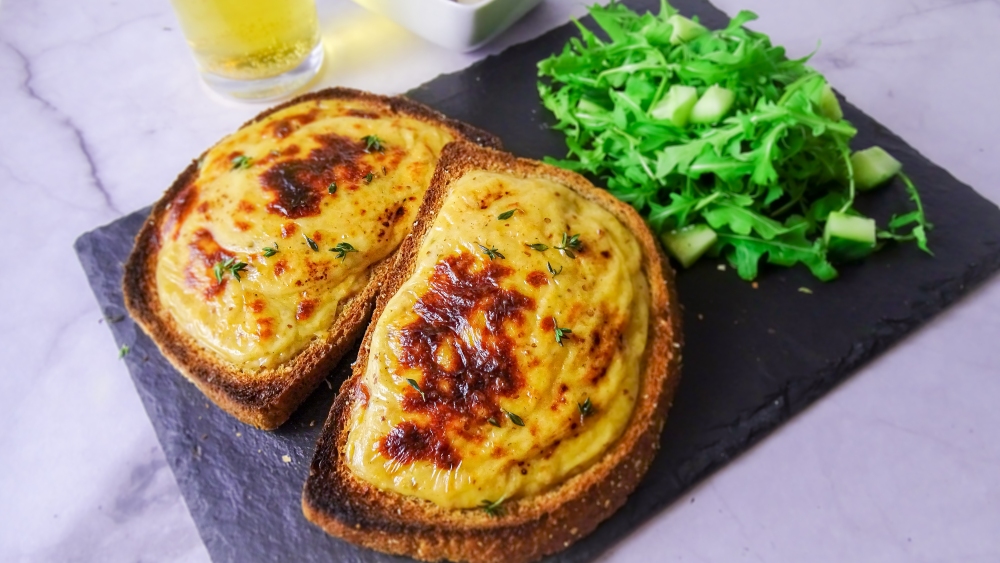 Any time Welsh Rarebit comes up in conversation (at least once in my life), my dad will make a joke to the effect of “nice, apart from the big ears.”  Easy, perhaps, but it goes down well enough.  Consider my surprise when I discovered today that the original name of the dish was “rabbit”, and is intended to be a joke.  Not sure I fully understand it – perhaps you had to be there…in the 18th century?  In any case, the dish itself may not even be Welsh in origin – seems to be a joke at the expense of the Welsh!  Makes a change from lazy sheep references.

For those who are unaware, rarebit is a bit like a croque monsieur, inasmuch as it’s hyped-up cheese on toast.  In this case, a cheese and alcohol-based thick sauce grilled atop toast.  An open fondue sandwich.  Wine and beer are the typical go-tos, but in the spirit of the season I decided to give it a bit of a wintery twist.  I certainly feel as though recent years have helped people to embrace the brilliant partnership of cheese and sweeter flavours – more adventurous fruit pairings, a smattering of candied ginger or orange-zest too.  That’s what I hoped to bring forward in this dish – dry apples and spice alongside cheese (in my case, smoked cheddar, but any hard cheese will do.)